The previous section on Parallel Query Execution covered some fundamental concepts such as partitioning, which we will build on in this section.

In the following sections we will explore how different types of plans are executed in a distributed environment and then discuss building a distributed query scheduler.

Let's use the example SQL query that we used in the previous chapter on Parallel Query Execution and look at the distributed planning implications of an aggregate query.

We can execute this query in parallel on all partitions of the tripdata table, with each executor in the cluster processing a subset of these partitions. However, we need to then combine all the resulting aggregated data onto a single node and then apply the final aggregate query so that we get a single result set without duplicate grouping keys (passenger_count in this case). Here is one possible logical query plan for representing this. Note the new Exchange operator which represents the exchange of data between executors. The physical plan for the exchange could be implemented by writing intermediate results to shared storage, or perhaps by streaming data directly to other executors.

Here is a diagram showing how this query could be executed in a distributed environment: 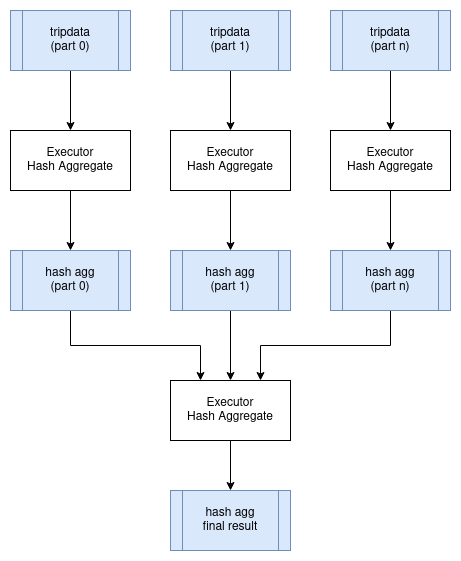 Joins are often the most expensive operation to perform in a distributed environment. The reason for this is that we need to make sure that we organize the data in such a way that both input relations are partitioned on the join keys. For example, if we joining a customer table to an order table where the join condition is customer.id = order.customer_id, then all the rows in both tables for a specific customer must be processed by the same executor. To achieve this, we have to first repartition both tables on the join keys and write the partitions to disk. Once this has completed then we can perform the join in parallel with one join for each partition. The resulting data will remain partitioned by the join keys. This particular join algorithm is called a partitioned hash join. The process of repartitioning the data is known as performing a "shuffle". 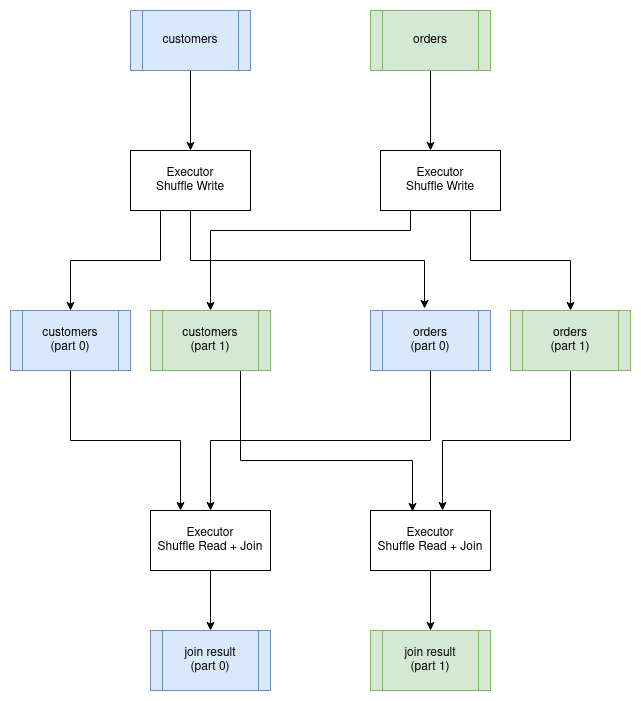 Distributed query plans are fundamentally different to in-process query plans because we can't just build a tree of operators and start executing them. The query now requires co-ordination across executors which means that we now need to build a scheduler.

At a high level, the concept of a distributed query scheduler is not complex. The scheduler needs to examine the whole query and break it down into stages that can be executed in isolation (usually in parallel across the executors) and then schedule these stages for execution based on the available resources in the cluster. Once each query stage completes then any subsequent dependent query stages can be scheduled. This process repeats until all query stages have been executed.

The scheduler could also be responsible for managing the compute resources in the cluster so that extra executors can be started on demand to handle the query load.

In the remainder of this chapter, we will discuss the following topics, referring to Ballista and the design that is being implemented in that project.

We will now use the following SQL query to see how this process works.

The physical (non-distributed) plan for this query would look something like this:

Assuming that the customer and order tables are not already partitioned on customer id, we will need to schedule execution of the first two query stages to repartition this data. These two query stages can run in parallel.

Next, we can schedule the join, which will run in parallel for each partition of the two inputs. The next operator after the join is the aggregate, which is split into two parts; the aggregate that runs in parallel and then the final aggregate that requires a single input partition. We can perform the parallel part of this aggregate in the same query stage as the join because this first aggregate does not care how the data is partitioned. This gives us our third query stage, which can now be scheduled for execution. The output of this query stage remains partitioned by customer id.

The final query stage performs the aggregate of the aggregates, reading from all of the partitions from the previous stage.

To recap, here is the full distributed query plan showing the query stages that are introduced when data needs to be repartitioned or exchanged between pipelined operations.

The query scheduler needs to send fragments of the overall query plan to executors for execution.

There are a number of options for serializing a query plan so that it can be passed between processes. Many query engines choose the strategy of using the programming languages native serialization support, which is a suitable choice if there is no requirement to be able to exchange query plans between different programming languages and this is usually the simplest mechanism to implement.

However, there are advantages in using a serialization format that is programming language-agnostic. Ballista uses Google's Protocol Buffers format to define query plans. The project is typically abbreviated as "protobuf".

Here is a subset of the Ballista protocol buffer definition of a query plan.

Full source code can be found at proto/ballista.proto in the Ballista github repository.

Data must also be serialized as it is streamed between clients and executors and between executors.

Apache Arrow provides an IPC (Inter-process Communication) format for exchanging data between processes. Because of the standardized memory layout provided by Arrow, the raw bytes can be transferred directly between memory and an input/output device (disk, network, etc) without the overhead typically associated with serialization. This is effectively a zero copy operation because the data does not have to be transformed from its in-memory format to a separate serialization format.

However, the metadata about the data, such as the schema (column names and data types) does need to be encoded using Google Flatbuffers. This metadata is small and is typically serialized once per result set or per batch so the overhead is small.

Another advantage of using Arrow is that it provides very efficient exchange of data between different programming languages.

Apache Arrow IPC defines the data encoding format but not the mechanism for exchanging it. Arrow IPC could be used to transfer data from a JVM language to C or Rust via JNI for example.

Now that we have chosen serialization formats for query plans and data, the next question is how do we exchange this data between distributed processes.

Apache Arrow provides a Flight protocol which is intended for this exact purpose. Flight is a new general-purpose client-server framework to simplify high performance transport of large datasets over network interfaces.

The Arrow Flight libraries provide a development framework for implementing a service that can send and receive data streams. A Flight server supports several basic kinds of requests:

It is important that results of a query can be made available as soon as possible and be streamed to the next process that needs to operate on that data, otherwise there would be unacceptable latency involved as each operation would have to wait for the previous operation to complete.

However, some operations require all the input data to be received before any output can be produced. A sort operation is a good example of this. It isn't possible to completely sort a dataset until the whole data set has been received. The problem can be alleviated by increasing the number of partitions so that a large number of partitions are sorted in parallel and then the sorted batches can be combined efficiently using a merge operator.

It is often necessary to run custom code as part of a distributed query or computation. For a single language query engine it is often possible to use the language's built-in serialization mechanism to transmit this code over the network at query execution time which is very convenient during development. Another approach is to publish compiled code to a repository so that it can be downloaded into a cluster at runtime. For JVM based systems, a maven repository could be used. A more general purpose approach is to package all runtime dependencies into a Docker image.

Distributed query execution has a lot of overhead compared to parallel query execution on a single host and should only be used when there is benefit in doing so. I recommend reading the paper Scalability! But at what COST for some interesting perspectives on this topic.

Also, there are many ways to distribute the same query so how do we know which one to use?

One answer is to build a mechanism to determine the cost of executing a particular query plan and then create some subset of all possible combinations of query plan for a given problem and determine which one is most efficient.

There are many factors involved in computing the cost of an operation and there are different resource costs and limitations involved.

Query costs can be computed upfront using an algorithm if enough information is known ahead of time about the data, such as how large the data is, the cardinality of the partition of join keys used in the query, the number of partitions, and so on. This all depends on certain statistics being available for the data set being queried.

Another approach is to just start running a query and have each operator adapt based on the input data it receives. Apache Spark 3.0.0 introduced an Adaptive Query Execution feature that does just this.

This book is also available for purchase in ePub, MOBI, and PDF format from https://leanpub.com/how-query-engines-work